We hope to be able to add more very soon.

The scope of the project is to provide the possibility for Ethiopian women suffering from prolapse of the uterus to afford surgical intervention.

Prolapse of the uterus is a highly debilitating disease that is quite widespread but not very well known. In most cases, those Ethiopian women suffering from the disease prefer to keep it hidden rather than suffer the shame of disclosure.

Prolapse of the uterus is primarily caused by the physical challenges that many women in Ethiopia must endure on a daily basis, combined with a high rate of pregnancy.

This disease can cause the sufferer to be alienated from society, often leading to separation  from the husband, and sometimes, most dramatically, the abandonment of her children since she is not able to look after them.

Each surgical operation costs 250 Euro. All donations that we collect for this project will be transferred to “Centro Aiuti per l’Etiopia” who coordinate the project in Ethiopia. Our goal is to offer this surgery to as many women in need as possible.

As of today, thanks to “Operazione Donna”, more than 2000 women in Ethiopia have benefited from the surgical operation. There are many more women on the waiting list.

There is no minimum requirement for a donation toward “Operazione Donna”. Whenever we arrive at increments of 250 Euro, one more women can afford this surgery.

If you would like to make a donation specifically for this project, please specify “Operazione Donna” as the payment description on your bank transfer order.

We have transferred Eur 1250,00   to Centro Aiuti per l’ Etiopia for the purpose of performing surgical operation to 5 women.

The project is still running and active, as soon as we collect more fundings we will offer more opportunities to women in need. We will keep you informed on the outcome of surgical operations we have sponsored.

This project has been completed and isn’ t running anymore

Burundi is one of the poorest Countries of the world. Geographically located in central Africa, right below the equator, Burundi is affected by the misfortunes and troubles typical of undeveloped countries such as starvation, diseases, poverty, illiteracy. Moreover there are still clear signs and damages from the civil war, ended about 10 years ago, which caused more than 300.000 casualties over a population of 6.000.000.

Located in Cibitoke province, north west area of Burundi, about 90 km from the country capital Bujumbura there is Masango.
It is not a proper town or village, Masango can be described as a meeting place for the Hutu population who lives on the hills within a distance of 20 km. In Masango these people can find some basic services such as school and medical. Aside from those buildings there is a church and few huts along a gravel road, which, during the rain season become a mud river.

For the purpose of offering further assistance to local people and specifically to kids and boys we have been proposed to contribute building a multi-purpose hall which is intended to host:

– Social and sport eventparticularly in favour of orphans;

– Social-educational activities focused on promoting the value of peace, tolerance and freedom.

The multi-purpose room has not been built yet, however some material (such as bricks, stones and sand) have already been  purchased.  We have been asked to help on purchasing cement, doors, windows and metal plates for the roof so to complete the construction.

Marta who was very sensitive of child would have loved contributing to this project.

We estimate a budget of 7.000,00  Euro should be enough for completing this project.

With real pleasure we can announce the Masango project has started. Following a site inspection done in January 2014 by a volunteer who is an  architect, we realized the budget estimation was not sufficient to cover the cost , so we funded and transferred EUR 10.000  in order to start the building activities.  We can also rely on an additional Italian volunteer who is currently in Masango, planning to stay there until June 2014. He will monitor the work progress and let us know in case additional resources are needed.

A special thank and recognition to Luciano from London for his generous contribution which make this project happening  in such a short time.

Here below an image of Masango as well as the plan view and a rendering of the new hall we are going to build. 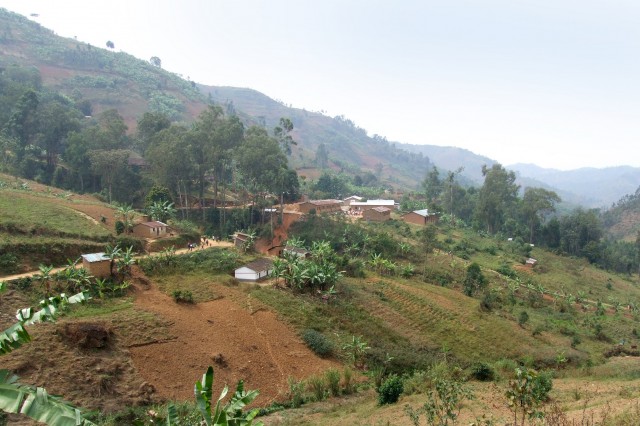 The center of Masango village 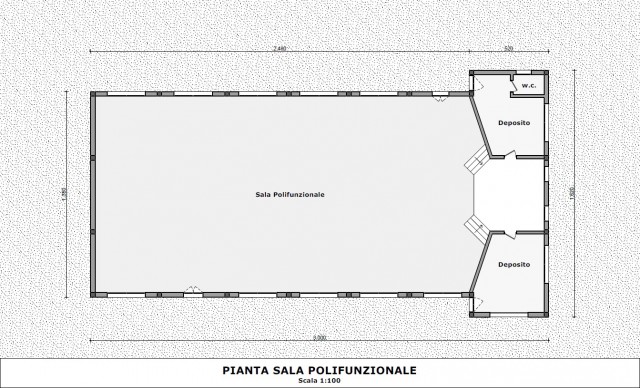 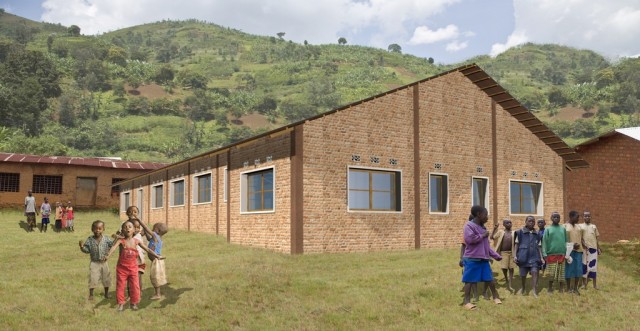 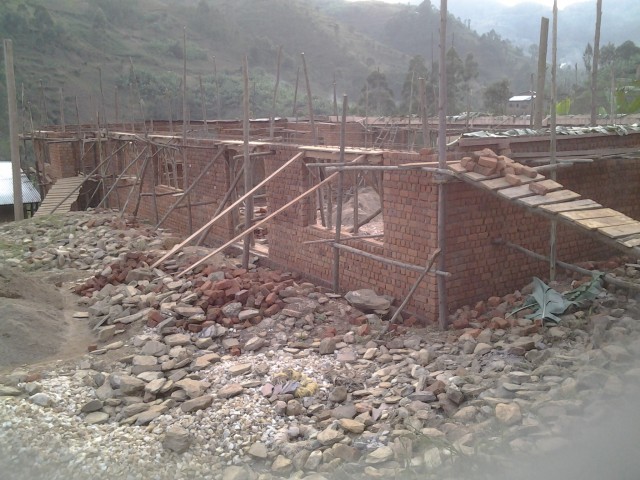 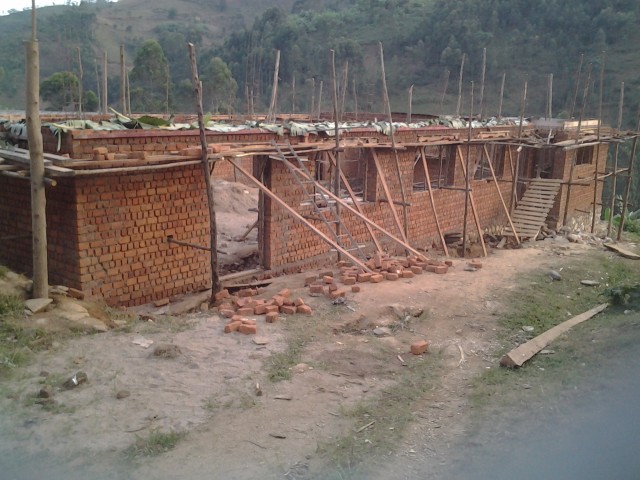 With an additional  EUR  5.000  funding we are going to complete the multi-purpose hall construction. The roof is done and the hall is next to be opened.

With respect to initial cost estimation we faced twice the expenses but we are very proud of the result and got the gratitude of the local people and the nuns who will manage the hall.

Here are  the most recent images of the building. 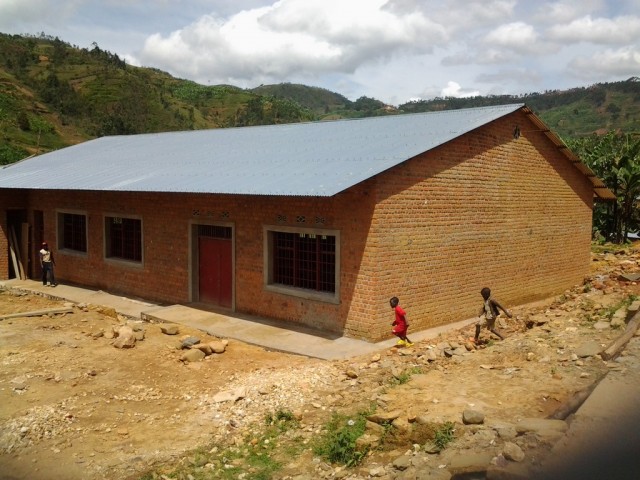 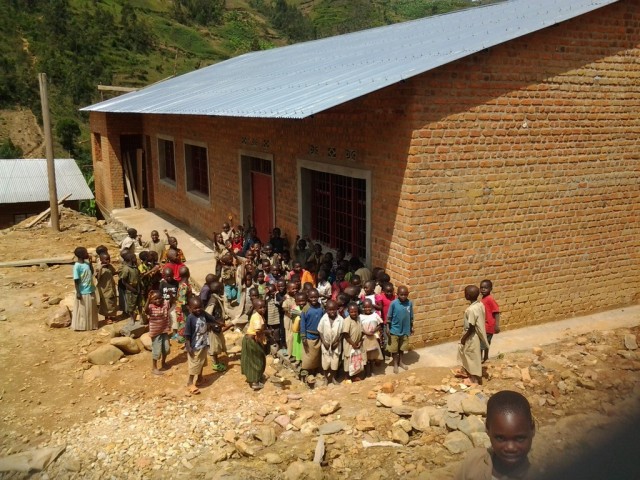 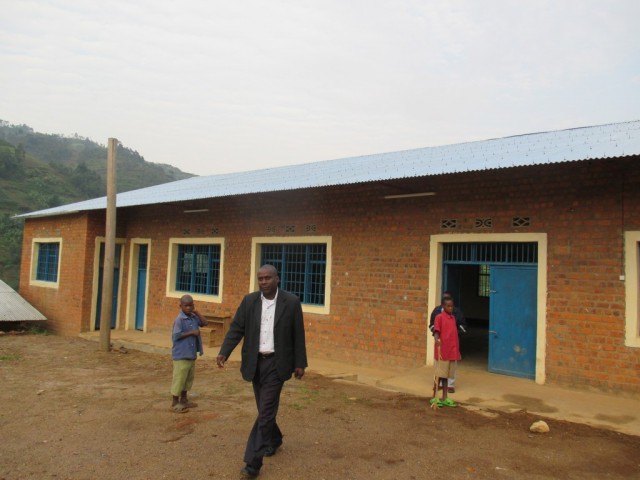 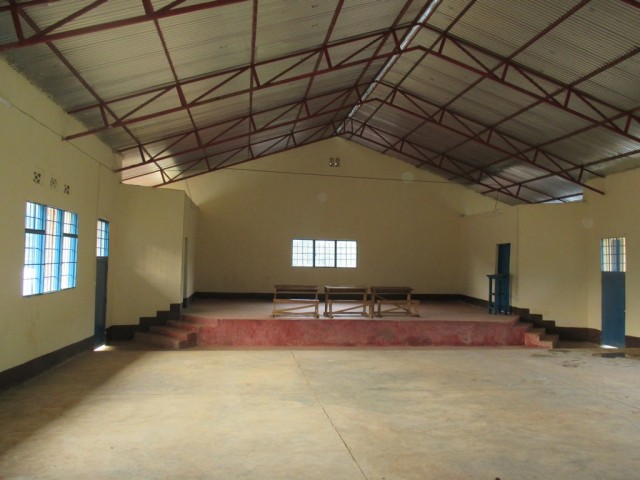 Thanks to all the contributors and people who worked on this project!!!!!!

If you are willing to make a donation specifically for this project please specify “Multi purpose hall Masango” as the causal on your bank transfer order.

This project has been completed and isn’ t running anymore

Celeste Cooperativa onlus is an Italian non profit organization, operating in northern Italy to provide educational as well as social support to underage people.
Located in a small village named Bracchio (next to Mergozzo lake in Verbania province) Celeste Cooperativa manage a house which can host up to 7 youths, some of them on a permanent base , some other for a temporary period of time.
The house is pretty old and quite small but it is offered free of charge by the local parish and the manager and operators of Cooperativa Celeste despite of the lack of resources indeed succeded creating a warm and positive environment where the young host feel at ease.
Among all the needs they have we identified a couple with high priority, which are a dryer machine for the daily laundry and new windows and doors as they are very old and low insulation class.
We did purchase a dryer machine and offered Celeste Cooperativa a financial contribution by 6.000 Euro for the new windows and doors.
Unfortunately we were not able to cover the full cost of new windows but our contribution covered approx. 85% of expenses so we make it happening.
Here below the letter of thanks from Celeste Cooperativa. 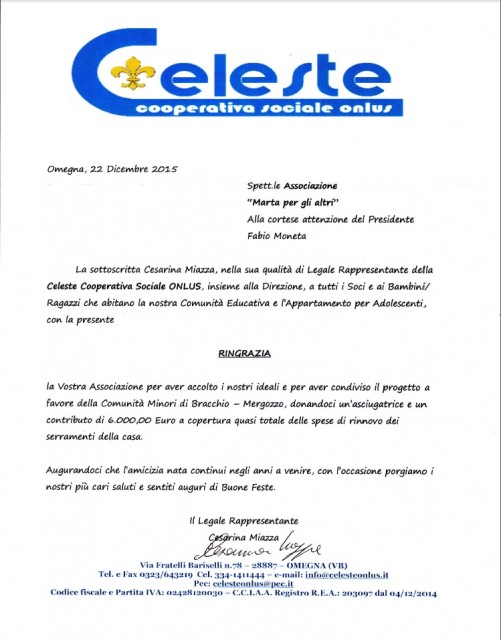 CSSV ( Social Services Consortium of Verbania province) is a public organization, operating in northern Italy to provide social support to disadvantaged people . It is based in Verbania and serves 26 city districts as well as some local mountain commununities.
Main activity of CSSV is supporting elderly people, diversely abled people, underaged people, and in general all people that are in a disadvantaged position with respect to the standard conditions.
Among the services CSSV offers they do help more than 100 youths, which for a number of reason need both educational and social support.
Marta Per Gli Altri is pleased to have contributed to the opening of the new diurnal center by offering CSSV a full set of domestic appliances.
Here below the letter of thanks from CSSV. 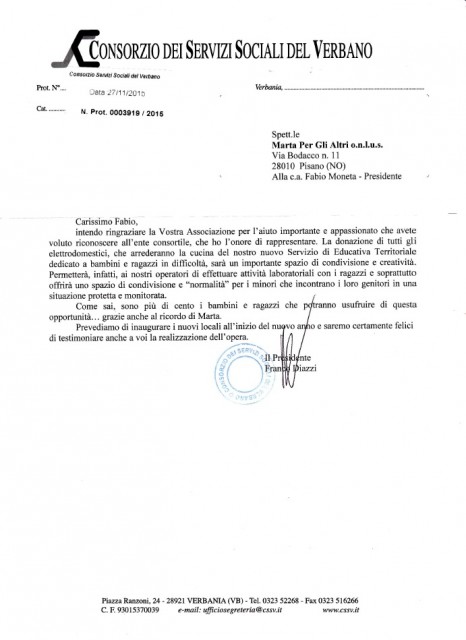 With  the essential contribution coming from the Charity event organized on November the 16th at Forum Caffe’ in Omegna, we have been able to complete a new classroom for the Primary school in Buterere-Burundi. The building was already existing but needed to be refurbished and furnished in order to allow the start of  the third class. With the amount of  6.000 Euro from our side the Sorelle della Carita’ ( the sisters organization who manage the school) were able in very short time to set up the new class classroom and furnish it with desks and wathever was absolutely necessary. This result was possible thanks to all the people who worked in order to create the Charity event and the people and the people who attended it. Here below some images of the new classroom we received together with a gratitude message from the Sorelle della Carita’. 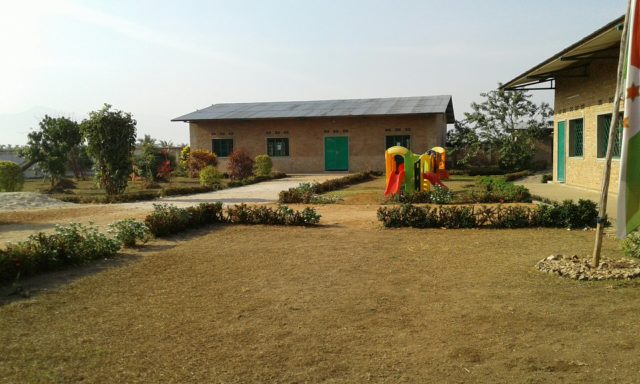 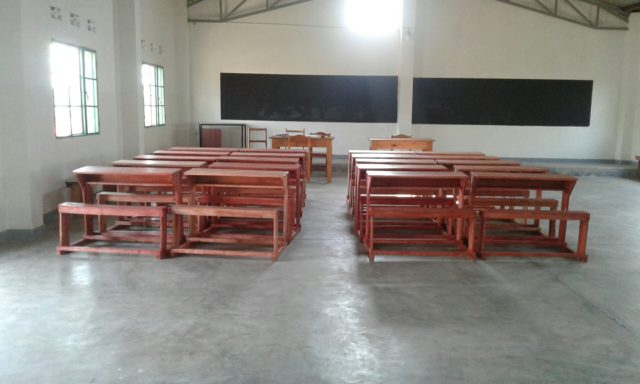 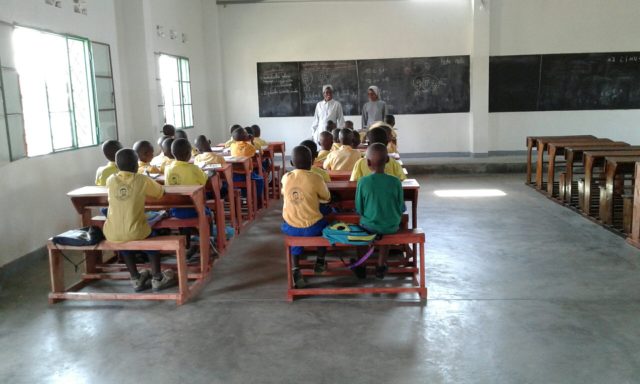 Autism is a form of growth disability that last for the whole life of the individual and affects the way he communicate and connect with the others. Autism is one of the more complex syndrome of the developing age as well as it is hardly manageable and in the most serious situations.
This syndrome come from biological factors that affect cerebral development during fetal phase or within the age of 3. In most of the cases the syndrome causes are unknown, while the known ones are mainly genetic based.
Very often autistic people need a lot of help and support for their daily life. Autistic children face severe difficulties on interacting, communicating and playing with the others. Verbal communication, when possible, is often inadequaute to the context with scarcity of communication gestures. Recreational activities are maily redundant type with little or no interaction with peers.
The natural trend of Autism symptoms isnot just to become permanent but also very variable.
As to date the root cause of autism are still unknown there are no clear therapy or medical treatments for it, the only activity proved to be effective is about educational programs.
A proper educational program during children growth age allow significant progress and improvement for the autistic individual. The educational program must start early in time and should involve child’s parents and relatives , as well as school and the world of adults.
Educational therapies are normally paid by the families, and for the need of experts or professionals and the frequency of the session the expense has relevant impact on family budget. Educational therapies do not bring to autism healing, still, if they are performed precociously and continuously they could significantly improve the chances for the child to live an autonomus and indipend life once he will be an adult, this is true at least for the less severe form of autism.
On this regard we are sure we made the right thing by funding Eur 10.000 as a financial support to educational therapies for about ten autisic children. The funding is perinent to year 2018 and for families with autistic children living in the VCO area.
For privacy reason we will not post any name or image of the beneficiary ( children and relatives), still for sake of clarity we inform that the funding will not be transferred to the beneficiary family but paid directly to the professional theraphists.